The Farm Bill – How the Past Impacts the Future

The Farm Bill is a piece of legislation that impacts every American — from keeping the food supply secure, providing assistance for those who need it and helping conserve the environment. But what is the Farm Bill and how did it become so impactful? The Farm Bill is an omnibus law that governs federal agricultural and food programs. Titles in the Farm Bill cover commodity revenue supports, agricultural conservation, trade and foreign food assistance, farm credit, research, rural development, forestry, bioenergy, horticulture and domestic nutrition assistance. The bill is renewed every five years and gives policy makers the opportunity to regularly review agricultural policy issues.

The Farm Bill is made up of twelve titles, but the Nutrition, Crop Insurance, Farm Commodity Support, and Conservation titles account for 99 percent of the anticipated mandatory Farm Bill spending. The Nutrition title has the largest spending of all the titles, with nearly 80 percent of its budget going toward the Supplemental Nutrition Assistance Program (SNAP).

The first Farm Bill was developed as part of President Franklin Roosevelt’s New Deal. After World War I ended, crop prices dropped, and many farmers struggled financially through the 1920s and into the Great Depression. The first Farm Bill passed in 1933 as a program to raise agricultural prices by paying farmers to limit production. By 1938, Congress made the program permanent with a renewal every five years.

In 1996, Congress voted to gradually eliminate farm subsidies. However, in 1997 crop prices fell. The next year Congress voted to bring back agricultural subsidies. This time the government offered direct payments to farmers based on how much land they had, instead of paying them not to grow.

Over the 89 years since the first Farm Bill, the bills have grown in complexity and budget, becoming more complicated and politically sensitive. Next year, Congress will consider the 19th Farm Bill to date. Even though we are less than a year away from 2023, there are still many unknowns. What do current events mean for the upcoming Farm Bill and its budget? How will this year’s midterm election impact who controls one or both chambers of Congress and therefore the makeup of the agricultural committees? Will past ad hoc spending be included? Will the soybean reference price and base acres be updated? Lastly, what will benefit Ohio soybean farmers the most? Stay tuned.

To support the Ohio Soybean Association’s efforts, become a member at SoyOhio.org/Membership. 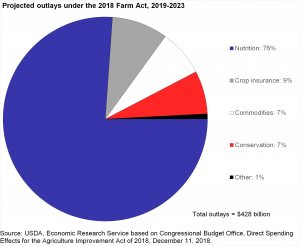