First quarter U.S. soybean exports reached a record level in 2021 in terms of volume, surpassing the previous record set in 2014. That year remains the only one to have exceeded the first quarter 2021 soybean export value. Strong Chinese demand due to a hog herd recovering from African Swine Fever continued after China had already bought most of Brazil’s soybean supply. As weather delayed Brazil’s 2021 harvest, the U.S. remained the main exporter with soybean supplies. However, as the U.S. supplies are now running thin, exports have fallen below the five-year average.

Although outstanding sales are not the best measure of next year’s exports, the new marketing year sales for the 2021 crop at this point in the year are at their highest level since 2012. The USDA is expecting 2021/22 soybean exports to be down from the current marketing year due to tighter beginning stocks and strong domestic crush margins that incentivize more of the beans to stay home. Weather throughout the growing season will play a large role in the actual outcome. 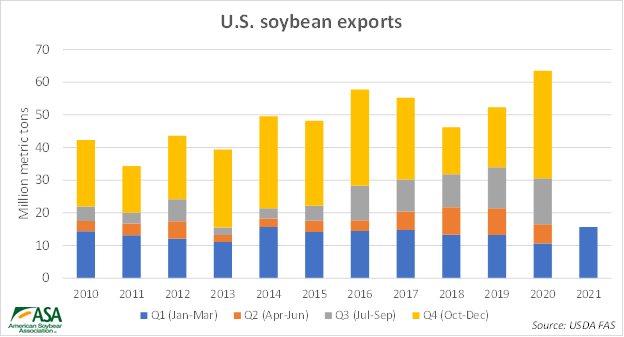